You are using an outdated browser. Please upgrade your browser to improve your experience.
by Alexander Vaughn
February 8, 2011
Moments ago, The Wall Street Journal revealed that Apple has launched the production of the next generation of iPads. "Obviously!" you might be tempted to say. Well, not so fast as for all we knew, Apple could have decided not to hold the traditional yearly schedule it follows with the iPhone and iPod. This was pure speculation, but not anymore. Indeed, the WSJ, which is widely believed to be fed insider information by Apple, and was spot-on many times before, just announced that production has started, and even gave us some more details about the upcoming new iPad:

The new device will be thinner, lighter and will come with a faster processor, more memory and a more powerful graphics processor, said the people familiar with the matter. It will have a front-facing camera for the first time for features like video-conferencing, but the resolution of the new iPad's display will be similar to the first iPad, they said.

Once again; the next iPad will be faster, thinner, lighter and feature a front-facing camera. As suspected however, it won't feature a higher-resolution display. Also no word on whether it will feature a NFC chip, or if the display will work better in challenging light conditions. As for the network:

The new iPad will be available through Verizon Wireless and AT&T Inc., but not Sprint Nextel Corp. or T-Mobile USA in the U.S., according to some of the people familiar with the matter.

All in all, this news goes well in hand with most rumors we've heard so far. The Wall Street Journal has an impressive track record when it comes to Apple rumors, so we now feel confident telling you that this is what you'll get come this  April. Any comments? 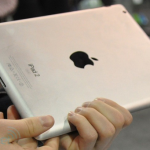 WSJ Confirms: iPad 2 In Production - Thinner, Faster & Comes With A Camera
Nothing found :(
Try something else