You are using an outdated browser. Please upgrade your browser to improve your experience.
by Alexander Vaughn
February 13, 2011
Following a report from Bloomberg earlier this week, it's now The Wall Street Journal's turn to confirm the rumor of an upcoming smaller, cheaper iPhone. While we didn't give much credence to the original story because of Steve Jobs' recent remarks on touch screen sizes, the WSJ has a much better track record. And, there are many that believe they are being fed insider information by Apple directly. Last week, they announced the second iPad has gone into production. Here is what they reported:

Apple Inc. is developing a new line of iPhones and considering an overhaul of its online file-storage service to make it easier for customers to access entertainment files and personal photos and videos, people familiar with the matter said. One of the people, who saw a prototype of a new iPhone several months ago, said the new device is intended to be sold alongside the current line of iPhones and would be about half the size of the iPhone 4. The phone, one of its codenames is N97, would be available to mobile carriers at about half the price of Apple's main line of iPhones, the person said.

As for MobileMe, it's apparently due to go free very soon, and will become even more of a virtual "locker" for us to keep our data in. This will alleviate the need for extended memory on our iDevices. There is also word of music streaming, but most of this is really nothing new. The rumor does seem to be growing. Of course, this could be just pure invention, or who knows, Apple trying to trick its competition into starting to work on unusable tiny smart phones. What do you think? ***Update: The WSJ has updated the post with more details:

The person who saw the prototype of the new iPhone said the device was significantly lighter than the iPhone 4 and had an edge-to-edge screen that could be manipulated by touch, as well as a virtual keyboard and voice-based navigation. The person said Apple, based in Cupertino, Calif., also plans to upgrade the iPhone 4.

They also added that the new MobileMe, which will let you access your entire iTunes library over the air, should be made available around June of this year. 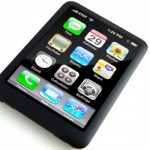