You are using an outdated browser. Please upgrade your browser to improve your experience.
by Bryan M. Wolfe
March 17, 2011
Fans of the popular Rovio game Angry Birds are in luck, as a new update for the iOS game is now available for both the iPhone/iPod touch and iPad versions. Version 1.5.3 of the game includes 15 new levels and of course, some new treats. Angry Birds remains a top seller in the App Store, mainly because its developers are always at work to make it better. Counting this update, 100 new levels have been added, which keeps long-time fans happy while attracting new ones. The 15 new levels offer more adventures with each more challenging than the next. In addition, watch out for the new Golden Egg, which is “good, bad and ugly.” Don’t worry though, as the game remains the same. It’s still six types of birds fighting for their survival against the evil green pigs. Angry Birds HD for the iPad is available for $4.99 in the App Store. The iPhone/iPod touch version is $.99. 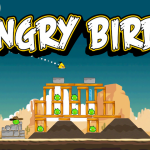 Angry Birds: Update Includes 15 New Levels And A New Golden Egg
Nothing found :(
Try something else