You are using an outdated browser. Please upgrade your browser to improve your experience.
by Bryan M. Wolfe
March 8, 2011
A new rumor states Apple will hold its annual iOS roadmap event in early April. During the event, the company will unveil iOS 5.0 and an improved MobileMe service. This news comes from Germany’s Macerkoft.de site. Apple has yet to confirm this information. For the Cupertino, California-based company to introduce iOS 5.0 in April would make perfect sense, given iOS 4 was announced in April 2010. Under this scenario, the iOS would almost certainly debut along with the iPhone 5 in June. A MobileMe refresh has long been rumored. In fact, it was surprising when Apple didn’t announce it at last week’s iPad event. The company recently did away with retail boxes of the MobileMe service and is no longer taking orders for it on Apple.com. This lead many to believe its $99 per year price tag would be eliminated. Various sources in recent months indicate Apple is expected to announce the service will soon include the ability to have “digital lockers” for storing music, photos, and videos. Currently, MobileMe serves as an e-mail, calendar and photo service, which is synced across devices. Apple has often been criticized for charging for a service that is essentially available for free from companies like Google and Microsoft. By shifting to a free offering, MobileMe’s popularity should increase. We've been discussing a rumored free MobileMe service since late last year; until we hear about it directly from Apple, be prepared to be disappointed. We’ll keep you updated on this rumor, and whether or not Apple confirms it. 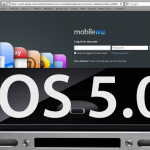 Will Apple Finally Announce A Free MobileMe Service And iOS 5 Next Month?

Will Apple Finally Announce A Free MobileMe Service And iOS 5 Next Month?
Nothing found :(
Try something else