You are using an outdated browser. Please upgrade your browser to improve your experience.
by Bryan M. Wolfe
March 18, 2011
Steve Jobs has signed up the first publisher who would agree to Apple’s new subscription plan, The New York Times. The venerable publication, which plans to begin charging its online customers for much of its content on March 28, has agreed to let Apple handle its subscriptions, thereby giving it 30 percent of the profits. This news comes from MediaMemo, which broke the news first. Interested customers don’t actually have to use iTunes to purchase a Times subscription, but they will have that choice. When they do, Apple gets its cut, and The Times will be denied valuable subscriber data, as per Apple’s terms. Subscribers can also purchase a subscription via The Times website. Either way, the subscription would give users full access to stories on the NYTimes.com website and through an iOS app, depending on the package bought. But here lies the problem. Not only will The Times begin charging for much of its content, there will be different prices charged for each iOS device. As such, those using an iPad will pay more per month than those using an iPhone/iPod touch. The rates are as follows: The NYTimes.com + the iPhone app, $15 every four weeks The NYTimes.com+ the iPad app, $20 every four weeks All Digital Access (Web, all iOS devices), $35 every four weeks Strangely, although The Times has agreed to implement Apple’s subscription plan into its apps, it won’t do so until before Apple’s June 30 deadline. Meaning until then subscriptions will be handled by The Times directly. The New York Times isn’t completely denying non-subscribers full access to its stories. Visitors to the Times’ website will be able to read up to 20 stories a month for free. Thereafter, stories referred from somewhere else (such as Facebook, Twitter, or another website) will also remain free. Google referrals, however, will be limited to just five articles per day. According to MediaMemo, users can get by the pay wall altogether by simply using Microsoft’s Bing website, which will have no limits. For now, at least. In addition, current print customers will get full digital access as part of their subscription.This runs $23.35 a month in the New York area, and up to $32 elsewhere. Finally, The Times is hinting at some sort of “special introductory offer,” to be unveiled March 28, which will probably mean free subscriptions for all for a limited time. It will be interesting to see how successful this will be for The Times and for Apple. For Apple to pick up The Times for its subscription plan is a positive step for the company. After all, its plan has been criticized sharply by publishers worldwide. What do you think? Leave your comments below. 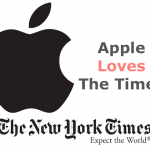 The New York Times Bites; Agrees To Apple's New Subscription Plan
Nothing found :(
Try something else