You are using an outdated browser. Please upgrade your browser to improve your experience.
by Alexander Vaughn
March 2, 2011
As you know, Apple just unveiled the iPad 2 at a special event in San Francisco. Right after that, we had the chance to give this wonderful new tablet a ride. So before you turn your old iPad into a sushi tray, check out our first impressions: First off, here is Steve Jobs' primer on the iPad 2 if you missed the liveblog:

Not to mention that the iPad 2 features a new A5 dual-core processor, which makes it twice as fast; graphics will be 9 times faster, and best of all, it's 33 percent thinner and it's lighter at 1.3 pounds. We don't know about the RAM yet, but it's clear it has at least 512MB, and maybe even 1GB. All this is available next week, at the same price points as the original iPad. So what's it like? Well, without a doubt, this is more than an incremental update. The device might look much the same at first sight, but the improved speed and reduced weight really make for a much better experience. You really notice it when you hold the iPad in one hand. What I'm saying is that it's not just a bit lighter, it's really significant. Also, Apple introduces with iOS 4.3, a new version of Safari, and it's really faster. On top of that, tabs will continue loading in the background, which is great. The "Smart Covers" are also quite incredible. The front is very much like Apple's case for the first iPad, but lighter and of course, it has the incredible ability to fold and become a stand. It's super easy to snap these on and off, but the stand is incredibly sturdy, much better than the old one. The back of the device is the same as on the current iPad; brushed aluminium. As for the cameras, the back one is 720p HD, and the front is VGA. Apple won't give out precise resolutions, so the camera is very likely not as good as the iPhone 4's. Here are some videos of the device and Apple's new apps. Check them out:

Here is the case in more detail:

Are you getting one? Tell us in the comments! 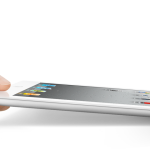 Apple Unveils The iPad 2 – First Hands-On & Videos [Updated]
Nothing found :(
Try something else