You are using an outdated browser. Please upgrade your browser to improve your experience.
by Bryan M. Wolfe
March 22, 2011
Exodus International, the organization behind a controversial app promoting “freedom from homosexuality” has responded to its critics. It recently spoke to The Christian Post about what it claims are its opponents use of propaganda to discredit its organization and app. Released in February, the Exodus International app has been called “hateful” and “bigoted” by its critics, with one organization, the non-profit Truth Wins Out (TWO), demanding Apple pull it from the App Store. According to Jeff Buchanan, Exodus International’s Senior Director of Church Equipping & Student Ministries:

"In no way shape or form is our message about trying to cure or do we try to promote that type of methodology or message. This is a label (gay cure app) that has been put forth by opponents to the application to serve as propaganda in order to stigmatize and really label the application in a false way and provoking a response such as you are seeing with the application."

On its blog, the organization says the app is designed to “be a useful resource for men, women, parents, students, and ministry leaders, (and) reach a broader demographic and readily provide information that is crucial for many seek hope and encouragement.” TWO, an organization that fights anti-gay religious extremism, has asked others to sign a petition calling for Apple CEO Steve Jobs to take the app offline. To date, nearly 110,000 people have signed the petition asking Apple to remove the app, with hundreds of others blasting the app in the iTunes store. Meanwhile, Buchanan believes the app can do good, saying:

"Our message is to promote the love of Jesus Christ to all those who have been impacted by unwanted same-sex attractions. Really, the point of the application is to provide the material that is also on our website in a smartphone format. Nothing more and nothing less."

This is a controversial issue, and while the majority of readers agree with TWO that the apps should be removed, others say it should not be removed on the grounds of freedom of speech. So far, the app remains in the App Store and the petition to remove it remains online too. Care to join this discussion? Leave your comments below. 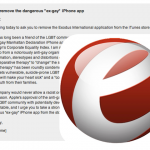 Is Apple "Anti-Gay"? Part Two
Nothing found :(
Try something else