You are using an outdated browser. Please upgrade your browser to improve your experience.
by Bryan M. Wolfe
March 22, 2011
Apple is suing Amazon.com over the use of its trademark, “app store.” The complaint, which was filed March 18 in federal court in California, accuses Amazon.com of trademark infringement and unfair competition and asks for a judge’s order to prevent the company from using the “app store” name. However, this isn’t the entire story. According to the lawsuit, Amazon.com has been using the word “app store” on its site since earlier this year. Kristin Huguet, a spokeswoman for Apple, in speaking with Bloomberg said:

“We’ve asked Amazon not to copy the App Store name because it will confuse and mislead customers.”

Until recently, Amazon.com was using the word “appstore” almost exclusively to promote the upcoming release of the game Angry Birds Rio. In this case, the online retailer was promoting the Android version of the game. The Angry Birds franchise, which includes the Angry Birds and Angry Birds Season titles, was made popular on iOS devices and is now expanding to other platforms.

Now, however, Amazon.com has expanded the use of the word “appstore,” with the introduction of its “Amazon Appstore for Android,” which went live this week. Since Apple has successful trademarked the word “app store” one would assume its position is solid. And ultimately, Amazon.com will be forced to remove the word “appstore” from its website. Not necessarily. According to Politico, Microsoft has appealed Apple’s registration of the word “app store,” and the matter will be decided before a trademark appeal board. Microsoft claims “app store” is a generic term, just like “flower shop” or “clothing store.” However, Apple disagrees, saying if that were true, then the same case could be made about the word “Windows.” According to Apple, in documents filed as part of the appeal case:

“Having itself faced a decades-long genericness challenge to its claimed WINDOWS mark, Microsoft should be well aware that the focus in evaluating genericness is on the mark as a whole and requires a fact-intensive assessment of the primary significance of the term to a substantial majority of the relevant public.”

If Apple were to lose the trademark on “app store,” Amazon.com, Microsoft, and others would be allowed to use the term as well. It will be interesting to see what happens with both the appeal and with Apple’s claim against Amazon.com. The case is Apple Inc. v. Amazon.com Inc. (AMZN), 11-1327, U.S. District Court, Northern District of California. What do you think? Is "App Store" a generic term or something more? Leave your comments below. 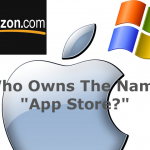 App Store: A Battle Is Brewing Over These Simple Words

App Store: A Battle Is Brewing Over These Simple Words
Nothing found :(
Try something else