You are using an outdated browser. Please upgrade your browser to improve your experience.
by Bryan M. Wolfe
March 30, 2011
Research In Motion (RIM) has debunked a MacRumors forum posting, which claims a BlackBerry Messenger app for iOS would be released on April 26. This news comes from BGR, which spoke to a representative at RIM. According to BGR:

RIM tells us that rumors that BlackBerry Messenger might launch as an app for Apple’s iPhone on April 26th, is false. “RIM did not hold a conference in Toronto this week, and Jim Balsillie did not speak at any event in Toronto this week.” We’re not saying it isn’t coming at some point in the future, but BlackBerry Messenger is definitely not hitting the App Store on April 26th."

The MacRumors forum message claimed a conference was held in Toronto, Canada where RIM Co-CEO Balsillie made the April 26 announcement. This isn't to say a BlackBerry Messenger app isn't coming, just that RIM says it won't arrive on April 26. It could very well be that RIM had planned on releasing it next month, but thanks to the MacRumor leak, decided against it. Or the post and date were completely fabricated, as the latest information from RIM suggests. What are your thoughts? Leave your comments below. 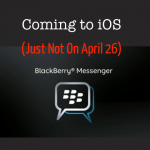 Debunked: RIM Says BlackBerry Messenger For iOS NOT Coming Next Month
Nothing found :(
Try something else