You are using an outdated browser. Please upgrade your browser to improve your experience.
by Tim Chaten
March 14, 2011
Now that iMovie has made its way onto our iPads, you may be curious to see just how well it performs. We were just as curious. The question we want to answer is this: If I am going to be shooting video on the road, what portable machine do I bring to edit/encode videos? We took the time to visit an Apple Store to run three speed tests on all of the stock machines except for the Mac mini. In first test, we copied a two minute video shot on an iPod touch 4 onto the various devices/computers. We used the camera connection kit to do this with the iPads and the camera import function within iMovie on the Macs. The results startled us. The iPad 2 killed every other Mac, including the new Flash-based MacBook Airs. The closest runner up was the Mac Pro, which clocked in at over double the iPad 2’s data transfer speed. We are not quite sure why the iPad is more efficient. The MacBook Airs, which are based around the same storage technology, were sluggish in comparison. It is our assumption that iOS is a more efficient operating system than the Mac, so it allows lower power devices to perform better. The results of this test are below: 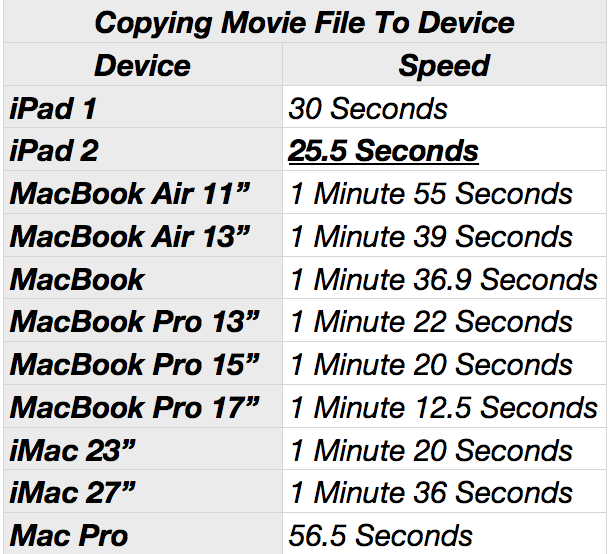 In our second test we created a blank iMovie project. We added the same two minute video (shot on an iPod touch 4) and exported that iMovie project to 720p. The results once again shocked us. Most would think that the new MacBook Pros or even the Mac Pro would be the clear winner. These machines have tons of power and performance. The iOS devices are running single or dual core 1 GHz processors. The high end Macs are running at least 2 GHz, in many cases have four cores! So how does the iPad 2 compare to machines that cost around $3,000? The iPad 2 killed the competition. The iPad 2 encoded the video faster than real time! It only took 1 minute and 56 seconds for the iPad 2 to encode the video. The closest Mac was 19 seconds slower! The Mac Pro accomplished this same encoding in 2 minutes and 15 seconds. Even the old iPad running iMovie and the iPod touch 4 managed to encode the video quicker than the Macs. There are a couple of reasons why these ultra powerful machines failed to compete with the iPad 2. The iPad 2 may have a special H.264 video encoding chip that enables it perform really well. The Mac version of iMovie may have a slower encoding engine. We are not sure what the reason is, but once again iOS devices seem to be the clear winner here. The results of this test are below. 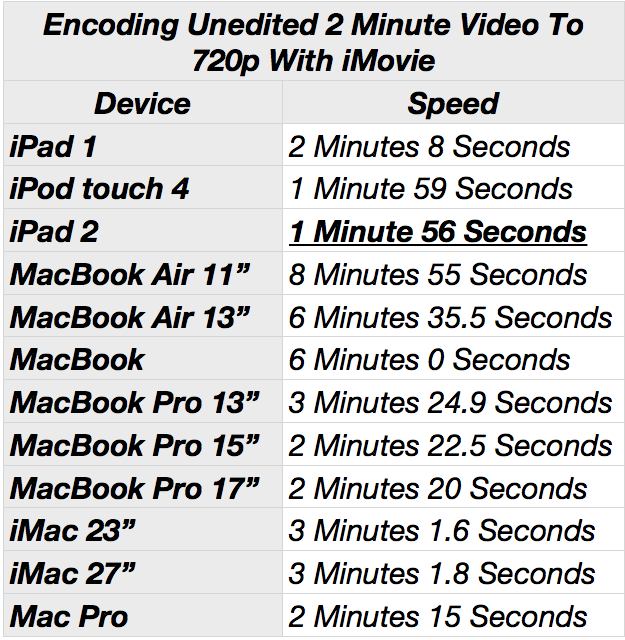 The final test we ran simulated more of a real world use case. We took that two minute video and added a title overlay, music in the background, and added an image to open and close the project. These enhancements are what we expect many will want to do when they are in the field. We found some very interesting results. The iPad 2 did not beat out the higher end machines in this test. But, it did compete very well and was not far behind. The most interesting find is that the iPad 1 and the iPod touch 4 encoded this new video about twice as slowly as the unedited version. The iPad 1 dropped from 2 minutes 8 seconds to 4 minutes 30 seconds. The iPod touch 4 dropped from 1 minute 59 seconds to 4 minutes 25 seconds. The iPad 2 did not have this massive slowdown. The iPad 2 dropped from 1 minute 56 seconds to 2 minutes 5 seconds. In our first two tests, the iPad 2 was faster than other iOS devices, but did not blow them out of the water. In this third test, we finally get to see where the iPad 2 really shows off its enhanced speed and performance. The iPad 2 still beat out the majority of the Macs in the Apple Store, including the 13” and 15” MacBook Pros. The 17” MacBook Pro encoded the video at a remarkable 1 minute and 48 seconds, while the Mac Pro encoded the video in 2 minutes 0 seconds. The iPad 2 was not far behind, encoding the video in 2 minutes and 5 seconds. The test results are below. 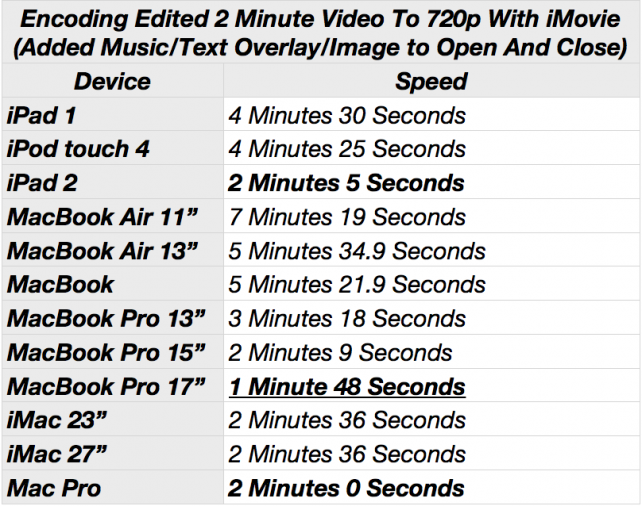 Those of you that think you need to drop a couple grand on a top of the line Mac just to do fast video encoding on the road may want to re-think that. The 17” MacBook Pro was the only “portable” machine to beat the iPad 2. The model we tested costs $2,499. The base model iPad runs $499. You could actually purchase five iPad 2s for the price of one 17” MacBook Pro. Having five iPads, you could actually encode five videos at the same time it would take to encode one video on the MacBook Pro 17” with iMovie. We were shocked by these findings. The question we wanted to answer is this: If I am going to be shooting video on the road, what portable machine do I bring to edit/encode videos? We think the answer is pretty clear. For most people, the iPad 2 has more than enough power for editing and encoding videos on the road. Yes, the edits you can do on the iPad are simpler, but they are sufficient for most of us. Let us know (in the comments below) if the iPad 2 will become your new mobile video editing/encoding computer. 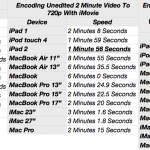 iPad 2 Beats Out MacBook Pros In iMovie Speed Tests!
Nothing found :(
Try something else