You are using an outdated browser. Please upgrade your browser to improve your experience.
by Bryan M. Wolfe
March 8, 2011
Apple’s iOS 4.3 update could be available as early as tomorrow morning, according to news first reported by The Loop. The build, which Apple originally said wouldn’t be available until Friday, March 11, is compatible with the upcoming iPad 2, along with the iPhone 3GS, iPhone 4 GSM, third- and fourth-generation iPod touch, and original iPad. The latest iOS 4 update, which could be the final one ahead of the expected launch of iOS 5.0 later this year, includes the long awaited Personal Hotspot feature for AT&T/GSM iPhones. This will allow users to share their iPhone’s cellular data connection with a Mac, PC, iPad or other Wi-Fi-capable device. Verizon iPhone customers have been able to use this feature since the handset was released in February. However, these customers will have to wait to get other features of iOS 4.3. The CDMA handset is not compatible with this release. Because of this, a separate build for those customers is expected shortly. Another exciting feature is iTunes Home Sharing. Now users can listen to music, play a podcast, or watch a movie or television show from their Mac or PC to their iPhone/iPod touch or iPad over a shared Wi-Fi network. AirPlay has also been enhanced, allowing the streaming of photos from your iDevice to your HDTV via Apple TV. Mobile Safari now includes the new Nitro JavaScript engine. Apple claims this technology runs JavaScript up to twice as fast as in iOS 4.2. Finally, Apple is giving users more control of their iPad switch.  It can now be customized to lock the screen rotation or mute the volume. The iOS 4.3 update also includes a number of smaller tweaks and updates, and bug fixes. The iOS update will most likely be available for downloading via iTunes beginning at 10 a.m. PST, tomorrow, March 9. 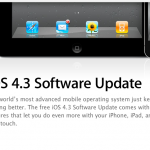 Who Needs An iPad 2? Latest iOS 4.3 Release Could Come As Early As Wednesday

Who Needs An iPad 2? Latest iOS 4.3 Release Could Come As Early As Wednesday
Nothing found :(
Try something else