You are using an outdated browser. Please upgrade your browser to improve your experience.
by Bryan M. Wolfe
March 28, 2011
Don’t look now, but the iPhone 5 might not debut until early next year (or maybe before), according to well-sourced Macotakara.jp, which claims the next iPhone won’t enter mass production until later this year. This news comes after numerous reports surfaced indicating Apple will use this June’s WWDC conference to announce software, not hardware, upgrades. Since the first iPhone debuted in 2007, each subsequent model was released in June at Apple’s WWDC conference. This newest rumor suggests that the iPhone 5 will skip 2011 altogether and instead, be released sometime after the end of Apple's fiscal year. This would mean the iPhone 5 could be released anytime after September, or into 2012. Beyond the obvious disclaimer that Apple has not confirmed this rumor, it makes some sense. The Verizon iPhone’s release in February of this year might have given Apple pause and made them recognize their long-held iPhone release schedule was no longer feasible. If Apple would push the iPhone 5 into calendar year 2012, it would be interesting. After all, what better way to debut the iPhone 5, but release it during the fifth anniversary of the first iPhone release. After all, that birthday is in 2012, and not 2011. Note: Our original report stated the iPhone 5 wouldn't be released until calendar year 2012. However, the original source, Macotakara.jp, has clarified its position to meaning the new hand set wouldn't arrive until sometime after the start of Apple's fiscal year 2012, which begins in September 2011. What are your thoughts? Leave your comments below. 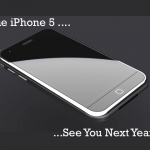 The iPhone 5: Early FY 2012 Release? [Updated]
Nothing found :(
Try something else