You are using an outdated browser. Please upgrade your browser to improve your experience.
by Bryan M. Wolfe
March 24, 2011
The crisis in Japan has sparked renewed interest in the issue of radiation contamination, but that wasn’t enough to persuade Apple CEO Steve Jobs to allow the release of an app that detects mobile phone radioactivity. As such, the company behind the app has released their iOS app for Cydia, an iPhone jailbreak. According to tawkon co-founder & CEO Gil Freidlander, his company attempted to persuade Apple executives to approve its tawkon app, even visiting with them on the Cupertino, California campus. However, in a terse email response following the meeting, Jobs stated, “No interest,” when Freidlander asked if his app would be approved for the App Store. Because of this, the app is now available free through Cydia for jailbreak users. Simply open your Cydia application and search “tawkon.” According to its creators, the tawkon app is “the only application that recognizes when your exposure to mobile phone radiation has increased, alerts you when radiation levels cross a predefined threshold, and provides simple, non-intrusive suggestions to reduce exposure to radiation when necessary.” The app is also available on BlackBerry and Android devices. 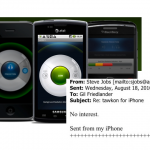 Steve Jobs Has "No Interest" In iPhone App That Detects Radiation, But You Can Still Get It

Steve Jobs Has "No Interest" In iPhone App That Detects Radiation, But You Can Still Get It
Nothing found :(
Try something else