You are using an outdated browser. Please upgrade your browser to improve your experience.
by Bryan M. Wolfe
March 31, 2011
Zite, the iPad newsreader, has been hit by a cease-and-desist letter from some of the biggest players in media, according to All Things Digital. The Washington Post, AP, Gannett, Getty Images, Time, Dow Jones, and others have gone after the weeks-old app, claiming copyright infringement. Created by Vancouver, Canada-based Worio, Zite burst onto the scene March 8, backed by $4 million in funding. Unlike other newsreaders, Zite says it ‘learns’ from user reading patterns. And then, an algorithm formulates future news stories to suit each individual user. Zite calls itself a “personalized iPad magazine that gets smarter as you use it.” Publishers seem to have an issue with how each article in the app is presented. Full articles are shown in either “reading” or “web” mode. The first method includes personalization features, which are used to customize future content for the individual reader. 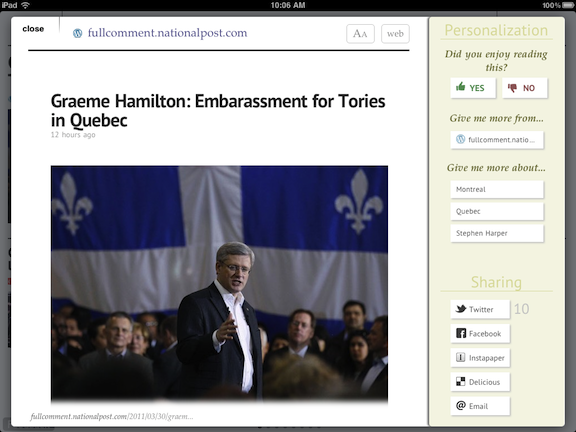 The second takes the reader to the original article using a built-in web browser. Under this mode, customized features are not available. 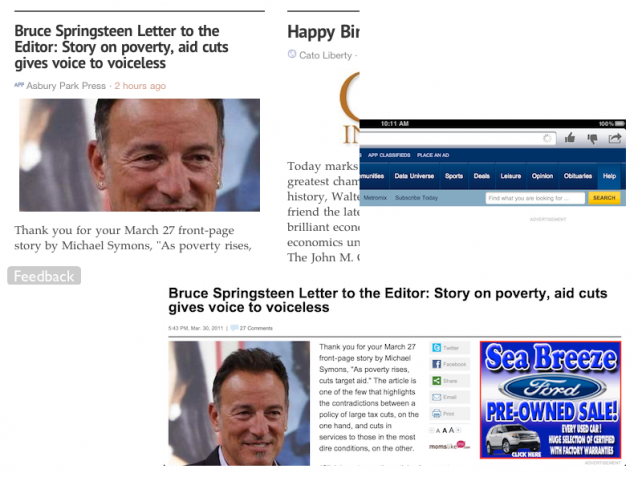 According to Zite CEO Ali Davar, his company will begin shifting the content from its “reading” mode to a Web one. He states:

“Zite’s goal is to work with publishers, not to be antagonistic. The few publishers that have contacted us regarding the reading mode view we have complied with their requests and simply switched over to web view. We’re talking to publishers right now to find a win-win for them monetarily and to at the same time preserve the great user experience.”

Regretfully, Zite’s biggest strength is the so-called “reading” mode. By removing this, the app’s uniqueness is gone. Hopefully, Zite can work with publishers to get this resolved, as they probably will. As noted on All Things Digital, Flipboard and Pulse had similar disagreements with publishers at the time each was released. Both are said to now be working with them to resolve their issues. Surprisingly, as of this morning, it appears that rather than shifting to the “reading” mode, the app has simply removed content from the aforementioned publishers. This cannot be confirmed, however. 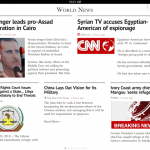 Ouch! Zite Newsreader Hit By Cease-And-Desist Order
Nothing found :(
Try something else