You are using an outdated browser. Please upgrade your browser to improve your experience.
by Jovan Washington
March 7, 2011
Thinner, lighter, and faster; Apple's iPad 2 was bound to send some competitors running back to the drawing board. There hasn't been a vocal regret from a company in a while until Samsung's Lee Don-joo, executive vice president of Samsung's mobile division, spoke out last week after the iPad event. Quoted in a Macrumors article, Lee Don-joo said:

Apple has presented new challenges for the South Korean company with a thinner mobile gadget that is priced the same as its predecessor.

More specifically, Lee stated that Samsung's pricing structure is in dire need of a change:

The 10-inch (Galaxy tablet) was to be priced higher than the 7-inch but we will have to think that over.

I'm glad to see at least one competitor acknowledge the importance of pricing when doing battle with the iPad. Apple might have a reputation for expensive products, however, the iPad has managed to beat its biggest tablet threats on cost. The Motoroloa Xoom has been a huge topic because of price. For example, the 3G Xoom tablet is rumored to be priced at $799. There are a number of tablets in the pipeline and a number of companies haven't committed to prices or release dates on their own tablets, like HP. I wonder how many companies besides Samsung are rethinking their plans. What about you? 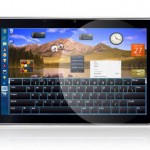 Samsung Rethinks Their Tablet Pricing Structure After iPad 2 Announcement
Nothing found :(
Try something else