You are using an outdated browser. Please upgrade your browser to improve your experience.
by Bryan M. Wolfe
March 28, 2011
Apple Inc won a round in its patent battle with Nokia as a U.S. trade panel ruled that the U.S. company did not violate any of five Nokia patents, according to Reuters. This stems from a complaint Nokia filed against Apple over its iPhone 3GS hand set and iPod nano. In its complaint, which was filed in December 2009, Nokia asked the court to bar the “importation of Apple devices that infringe Nokia patents.” According to Judge James Gildea, of the International Trade Commission, which hears many patent cases, his initial determination is that Apple did not violate the Nokia patents.  The next step will be for the entire commission to either uphold or throw out Gildea's decision. The target date for that decision is August 1, 2011. In addition to the iPhone 3GS mobile phone and iPod, Nokia’s complaint covers pretty much any hardware device created by Apple. These include: other iPhones, the iPod touch, and iPod Classic portable music players, as well as the iMac, Mac Mini, Mac Pro, Mac Book, MacBook Pro, and MacBook Air computers. 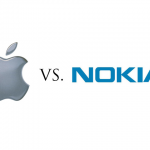 Score One For Apple In Its Battle With Nokia

Score One For Apple In Its Battle With Nokia
Nothing found :(
Try something else