You are using an outdated browser. Please upgrade your browser to improve your experience.
by A.T. Faust III
April 28, 2011
Since I wrote this piece yesterday, it seems like many sites are going all-out in their proclamations of Apple defeat as Android is set to surpass the App Store's total number of apps in just five months' time. John Paczkowski of All Things Digital posted a classic example of what I mean, saying about the matter that "[it] was great while it lasted, but Apple’s dominance in the mobile app market is coming to an end," thus presenting the facts without actually considering their practical meaning. Why that last bit's important, I'll get to in a moment. First a quick recap: Analyst firm Distimo released a few charts showing that, even as Apple's App Store nears 400,000 paid and free apps, Android is set to eclipse that number in less than half a year. Apple has three times more paid apps, while Google's OS has over 12,000 more free apps available. Growth rates show both systems continue to get bigger and more popular, but that Cupertino's is slowing down a bit. Got all that? Now I'm going to tell you and Mr. Paczkowski and everyone else why it is absolutely imperative that analysts back up this data with real-world implications: John Q. Public (and Jane, too, ladies) isn't as tech savvy as we are. (The simple act of your reading this or any tech-industry blog is enough to expel you entirely from the category of "average populace" as we mean it.) So, when great, big, David-slays-Goliath numbers like Distimo's leak out to the mainstream media without qualification, they get butchered and simplified, taken at face value, and lauded vehemently by the talking heads on television. People who still watch local and national nightly news and read real newspapers -- older folk and younger folk alike -- suddenly think the world is changing, when, in most cases, nothing really is. When that public sees these numbers, they will naturally assume "bigger" means "better." This is especially true in the technological sector, where the more product support a device (or family of devices) has, the better it sells and the more confident the consumer is that his purchase of said device will be more future proof than competing products. Where the Android numbers begin to falter is in the realm of user and developer experience. Christian Zibreg at 9 to 5 Mac sums it up pretty well:

Another problem plaguing Google’s store is the fact that Android users seem to be purchasing apps far less frequently than their iOS counterparts. Moreover, Android Market’s storefront layout makes app discovery unwieldy, while late introduction of in-app purchasing options and the lack of simplified billing mechanism derail the store economics. Meanwhile, Jobs tells us Apple paid iOS developers two billion dollars since the App Store’s inception a little over two and a half years – and that’s after Apple’s 30 percent cut."

From a developer's perspective, why go through the time and trouble (fragmentation notwithstanding) to put out a quality, paid app on a platform that will not support the purchasing model in general? Additionally, TUAW's own app-writing Erica Sadun explains, among other things, that

Apple is already winning hearts, wallets and developers with its lickably delicious product line. My dad is in love with his iPad, and my friends' kids wouldn't ever give up their iPods. So long as iOS continues to grow, does it really matter quite so much what the rest of the market is doing -- especially if it isn't innovative and pushing boundaries?

My answer? No, it doesn't. And if mass media and news outlets pretend that it does, a lot of people are going to miss out on a better mobile experience. On top of all that, there are a few glaring metrics the press just isn't picking up on. First, Apple works feverishly to approve and deny apps based on a slew of criteria, from stability to quality to product redundancy. Second, there is still not a truly stand-out Android app in that giant, steamrolling app store of theirs. Third, the raw number of apps available does not equate to the number of app downloads, which is the most important factor involved except for the final point -- namely, that the raw number of apps available has nothing to do with app revenue. I'm not saying Android doesn't have its fans -- it absolutely does (and vocal ones, at that). All I'm saying is that dozens of global companies make Android handsets, most of which are free or very inexpensive on contract (and almost always outdated by better-spec'd machines only weeks later). Apple, on the other hand, is the only company putting out the iPhone, iPad, and iPod, they all get hardware updates once a year, and they're never on sale until newer models arrive. What it all boils down to is that people who can afford an Apple product can afford to buy apps. Android users are far more reluctant to part with their money, which is why most of them (I'm excluding obvious flagship purchasers here) settle on Android in the first place. If you're still not convinced, check out TUAW's insightful "Four Android myths lazy analysts love". Leave your love or hate in the comments, but please direct it at the platforms, not the people, okay? 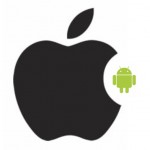 Android Market To Take Over App Store Numbers, So What?

Android Market To Take Over App Store Numbers, So What?
Nothing found :(
Try something else