You are using an outdated browser. Please upgrade your browser to improve your experience.
by Bryan M. Wolfe
April 18, 2011
Apple is suing South Korean-based Samsung Electronics Co., claiming the electronics giant copied the look and feel of its iDevices. This news was first reported by The Wall Street Journal. The lawsuit, filed by Apple on April 15 in the Northern District of California, alleges Samsung violated the company’s intellectual property. It specifically targets the company’s “Galaxy S 4G,” “Epic 4G,” and “Nexus S” smart phones, and its “Galaxy Tab” tablet. According to the lawsuit:

"Rather than innovate and develop its own technology and a unique Samsung style for its smart phone products and computer tablets, Samsung chose to copy Apple's technology, user interface and innovative style in these infringing products.”

In addition to producing devices of its own, Samsung is one of Apple’s top component providers. It provides flash components for the iPhone/iPod touch and iPad. In addition, it manufactures Apple’s A4 and A5 processors found in the iPhone and iPad. [Photo: 9 To 5 Mac] 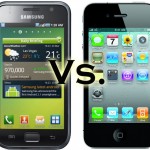 Apple Sues Samsung Over Device Similarities
Nothing found :(
Try something else