You are using an outdated browser. Please upgrade your browser to improve your experience.
by Bryan M. Wolfe
April 14, 2011
It’s now official: the long-promised white iPhone 4 is coming this spring, as Apple promised us last October.This news comes from The Wall Street Journal, which used unidentified sources from Apple to confirm the story. The white iPhone 4 was supposed to arrive with its black counterpart in June 2010. However, it was delayed numerous times because of production issues. There was no specific date given for the white iPhone 4's release, except to say it would be in the "spring." According to the Journal, Apple declined to say which carriers would initial carry the white iPhone. However, Bloomsberg Businessweek indicated late yesterday it would be available through both AT&T and Verizon. The Journal noted:

The iPhone has been a hit with consumers. Apple sold roughly 16.2 million iPhones in its holiday quarter, an 86% jump over the same time a year prior. Analysts say the white iPhone will likely spur additional demand, which may help the company power through the summer quarter.

Folks, would you buy a white iPhone this spring or wait for the iPhone 5? Let us know by using the comments below. 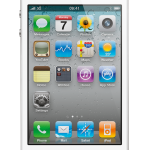