You are using an outdated browser. Please upgrade your browser to improve your experience.
by A.T. Faust III
April 23, 2011
According to breaking reports from CNET and Electronista based on convincing anecdotal evidence out of Europe, Apple's long-delayed and lusted-after white iPhone 4 will be available for purchase in the UK starting next week. After nearly 10 months in production-related limbo, Apple and its manufacturing partners have seemingly solved the rumored discoloration and camera issues plaguing the unit's expected 2010 launch. While there was doubt a white iPhone 4 would be released at all, it appears that stronger-than-expected interest in the white iPad 2 has made Apple's decision a no-brainer. Not only will this serve to entice new customers and hold-outs to the platform, it also makes efficient use of current production resources as the next-gen iPhone (4G, 4S, 5?) gets set for an expected autumn refresh. To date, white iPad 2s have been more popular than their black counterparts (especially for users upgrading from the first iPad), and there have yet to be any complaints of yellowing bezels or uneven coloration. Whether the white handset's delays had to do with actual production issues or simply Apple's desire to refine the tone just so, we may never know. But know this: The white iPhone 4 is most definitely dropping. To catch one, you're probably going to have to get in line. Information on US availability is unavailable at this time. 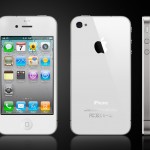 Apple's Fabled White Knight Gallops Into The UK
Nothing found :(
Try something else