You are using an outdated browser. Please upgrade your browser to improve your experience.
by A.T. Faust III
April 21, 2011
According to breaking news from Reuters today, Apple's long-rumored, oft-spied data center in North Carolina, USA, is ready to go live. The only hold-up, according to several industry insiders, is the required finalization of whatever licensing deals iTunes' various music suppliers are willing to sign. Because Apple hopes to beat Google off the line with this burgeoning and potentially lucrative distribution system, it can be expected that any such deals are on the hot seat and will be pushed through in a matter of days. Beyond iTunes proper, there has been much speculation and debate over what exactly the data center will be responsible for, from new video streaming services to the aggressive promotion (and hopeful mass-adoption) of a potentially free Mobile Me cloud. Additionally, and equally probable, is that Apple will finally upgrade all iTunes music from 16-bit to 24-bit audio files. Expect all of these, in one form or another, to happen in short order upon the massive facility's launch. A more far-fetched supposition that pegs the center's primary use as a homegrown Apple video service streaming early-run movies and network television libraries (a la Netflix) came to light a week ago, though TUAW released a fairly convincing argument to the contrary. Time will certainly tell, but it's looking more and more like that time is just about here. An exciting few weeks are in store for Apple enthusiasts and analysts alike, so let us know what you think about these prospects in the comments below. 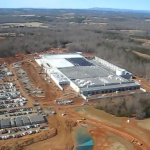 Apple's Mythical NC Data Center On Brink Of Reality
Nothing found :(
Try something else