You are using an outdated browser. Please upgrade your browser to improve your experience.
by A.T. Faust III
April 27, 2011
Apple CEO Steve Jobs and senior vice president Phil Schiller sat down with tech columnist Ina Fried to explain why the construction and manufacture of the white iPhone 4 (available tomorrow!) was such a tricky affair. Rather than just handing off the black model to gullible 'ol Ben Rogers, Apple had to rethink sensor and component interaction with the device's new, white shell. While those problems were eventually solved for the March iPad 2 launch, Schiller explains the time-consuming hurdles they faced in preparation:

It’s not as simple as making something white. There’s a lot more that goes into both the material science of it–how it holds up over time…but also in how it all works with the sensors.

In fact, that in itself isn't new information; it was assumed to be the case by the tech community at large for some time now, though it's nice to have it finally verified by those at the top. What is new, though, is today's disclosure about apparent UV issues plaguing the white handset. Simply, Fried summarizes that, "like fair-skinned humans, white iPhones need a little more UV protection from the sun." I certainly hadn't thought of that. But Apple did, so now they can sit back and really enjoy the fruits of their labor. 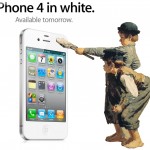 White iPhone 4 No Tom Sawyer Story
Nothing found :(
Try something else