You are using an outdated browser. Please upgrade your browser to improve your experience.
by Bryan M. Wolfe
April 22, 2011
AT&T admitted its network wasn’t ready for the iPhone when it debuted. This admission, first uncovered by Business Insider, is part of a new public filing AT&T made as it seeks support in its bid for T-Mobile. The filing states:

A smartphone generates 24 times the mobile data traffic of a conventional wireless phone, and the explosively popular iPad and similar tablet devices can generate traffic comparable to or even greater than a smartphone. AT&T’s mobile data volumes surged by a staggering 8,000% from 2007 to 2010, and as a result, AT&T faces network capacity constraints more severe than those of any other wireless provider.

The original iPhone debuted in 2007 exclusively on AT&T’s network. Worrisome still, the carrier concludes that without T-Mobile, it won’t be ready for the barrage of new cell phone traffic in the coming years. It states, the acquisition of T-Mobile:

AT&T has often been criticized that its network is slow and not available everywhere in the U.S. Although with this filing AT&T should be commended for its honesty, it makes you wonder what happens if the company is not allowed to acquire T-Mobile. By its very admission, it states:

Over the next five years, data usage on AT&T’s network is projected to skyrocket as customers “mobilize” all of their communications activities, from streaming HD video and cloud computing to a range of M2M applications like energy management, fleet tracking, and remote health monitoring. In just the first five-to-seven weeks of 2015, AT&T expects to carry all of the mobile traffic volume it carried during 2010.

This is interesting stuff from the second largest U.S. mobile carrier, which hopes to purchase Deutsche Telekom’s T-Mobile, pending regulatory approval. An AT&T/T-Mobile company would become the nation’s largest, overtaking Verizon, which currently holds that distinction. What do you think? 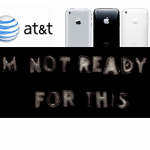 AT&T: We Weren’t Ready For iPhone, Might Not Be Ready For Future

AT&T: We Weren’t Ready For iPhone, Might Not Be Ready For Future
Nothing found :(
Try something else