You are using an outdated browser. Please upgrade your browser to improve your experience.
by A.T. Faust III
April 30, 2011
MacStories last week ran an article about German automaker BMW and their new, Apple co-designed iDrive system. Available in all model classes from Series 1 to Series 7, iDrive purports to integrate various iPhone features for use via the vehicle's in-dash LCD display. On the surface, the product looks pretty good. You simply lay your iPhone into its center-console socket, open the custom BMW app, and get to work using your car's proprietary rotating control knob to browse and engage Pandora streams or post Facebook and Twitter updates. There are a few automations in place for the social stuff, mainly location and ETA updates/tweets using the car's GPS system to plot your course and tell your buddies what time you're likely to arrive at a given POI. However, iDrive -- at least right now -- seems extremely limited, and trading touchscreen control for BMW's weird spinning dome has got to be wildly counterintuitive. Neither method, though, is particularly safe while driving, and there's no indication the BMW software will do helpful things like read out received texts and emails. It will answer calls and route sound to the car's speakers, so that's something, but until further communication functionality is added, the whole thing just seems unnecessary. If car makers or aftermarket accessory shops wanted to really revolutionize things, we'd see plate-swappable in-dash replacement cradles to fit all iDevices, allowing the user to run manufacturer-made interface apps for their particular vehicle (with the user's choice of navigation software) on the device itself. That's what I'm waiting for: a big, empty space in my dash where my iPad or iPhone or iPod can sit, showing me maps and stats, streaming music, and answering calls or texts totally hands-free. Of course, that would kill the necessity for a car-buyer to upgrade to an expensive in-dash display system. So, we're stuck with things like iDrive. Still, Autoblog says of BMW's efforts that "the execution is easily the most polished we've seen from an OEM." But it won't really matter 'til the tech makes its way to the Hondas, Hyundais, Toyotas, Kias, Nissans, and Chevys the rest of us drive. (Ford, of course, has "Sync," which is a different deal altogether.) Is iDrive enough to make BMW your next car purchase? 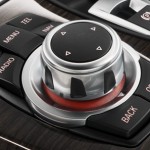 BMW's iDrive Demo Is Kind Of Neat, Kind Of Not

BMW's iDrive Demo Is Kind Of Neat, Kind Of Not
Nothing found :(
Try something else