You are using an outdated browser. Please upgrade your browser to improve your experience.
by Alexander Vaughn
April 14, 2011
Apple has just released a couple of new versions of iOS to the world. The new version for GSM iPhone users, as well as iPod and iPad owners is iOS 4.3.2. For Verizon iPhone owners, the new update comes labeled 4.2.7. According to the changelog (above, courtesy of Macstories), this update is just here to fix bugs with FaceTime, and some 3G iPad issues. Furthermore, it claims to contain many security fixes, which most likely means it closes the latest loopholes that allowed us to jailbreak. Unless you're a jailbreaker, we recommend you make the update. Surprisingly, this update doesn't bring parity to GSM (AT&T) and CDMA (Verizon) iPhone owners as we expected. We haven't yet confirmed the differences between iOS 4.3.2 for GSM iPhones as opposed to iOS 4.2.7 for the CDMA devices, but they must exist to justify the different version numbers. We are certainly hoping that Apple will close that gap very soon, before the world starts talking about iOS fragmentation. Indeed, having different handsets running different firmware might eventually become an issue for app compatibility. As far as we can see, no new features have been added in this update. Have you seen anything new? Tell us in the comments! 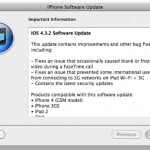 Apple Releases New Versions Of iOS - Fixes Many Bugs
Nothing found :(
Try something else