You are using an outdated browser. Please upgrade your browser to improve your experience.
by Mike Lata
April 22, 2011
In the middle of the current debacle on iOS devices keeping track of their users' location, some investigators and law enforcement officials have now admitted that they not only knew, but regularly took advantage of the loophole. According to the San Jose Mercury:

"Those investigators -- and the software developers who make applications they use in their work -- have known since at least last year that the iPhone has a hidden file on it that tracks its movements. Data gleaned from the file has been used in numerous investigations since forensics experts discovered it, those experts say,"

Further, digital forensics specialist Christopher Vance also admitted for the report that he has used the particular file, consolidated.db, many times in his line of work to a success. He even admitted it has been a standard practice for a little while now.  In consequence, certain politicians have now start asking questions in regards to legal matters and possibly pursue Apple:

"Tracking file has also caught the attention of lawmakers. Sen. Al Franken, D-Minn., and Rep. Ed Markey, D-Mass., separately sent letters to Apple CEO Steve Jobs asking for more information about the file and what, if anything, Apple itself does with the data."

Apple will certainly have some explanations to do. The good news is however that nobody, unless they access your iPhone can track where you've been at the moment, including Apple. Still, this shouldn't be there. Normal practice, or just a bug? We'll find out soon enough. 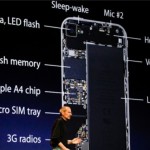 Investigators Admit To Using iPhone Location Data To Track Suspects
Nothing found :(
Try something else