You are using an outdated browser. Please upgrade your browser to improve your experience.
by Bryan M. Wolfe
April 28, 2011
The iPad 2's introduction dropped Apple to No. 4 in total PC sales in the first quarter of 2011, according to a report by Canalys. The consulting firm analyzed worldwide PC sales when tablets are included. In total, Apple accounted for 9.5 percent of the PC market in the quarter ending March 31. HP (16.6 percent), Acer (12.8 percent), and Dell (11.3 percent) took the top spots, in a market that grew 7 percent overall A year-over-year comparison shows Apple’s growth at nearly 188 percent. HP and Acer saw sales drops, while Dell gained slightly. However, a combination of strong fourth quarter 2010 sales and iPad 2 supply constraints saw Apple’s numbers drop 31 percent from one quarter to the next. According to Canalys:

The full impact of the iPad 2 launch will not register until subsequent quarters, as Apple gets the product into the hands of consumers.

The overall tablet market saw shipments reach 6.4 million units worldwide. Of those, 74 percent were iPad/iPad 2 shipments, or 4.7 million. Finally, Canalys has found “that current pad usage resembles that of a PC, rather than a media player or e-book reader.” This suggests iPad owners use their devices using a “significantly wider range of categories than other pad users.” In our opinion, the most significant part of this survey is the effect supply chain limitations have on Apple’s overall sales numbers. It suggests an introduction of a new iDevice leads first to weaker sales quarter-over-quarter, and then a noticeable increase later on. With this in mind, it isn’t surprising Apple is spending $11 billion to improve its supply chain. As Apple COO Tim Cook explained:

“The iPad has the mother of all backlogs, but we’re working very hard to get [it] out to customers as quickly as we can.”

Can you imagine what would happen if Apple figured out a way to match demand with supply for each of its iDevices on Day One? What do you think? Leave your comments below. 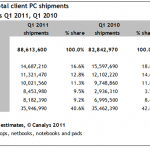 How The iPad 2 Lead To A 31 Percent Drop In Apple's Sales
Nothing found :(
Try something else