You are using an outdated browser. Please upgrade your browser to improve your experience.
by Bryan M. Wolfe
April 16, 2011
Those still interested in buying an iPad 2 should visit a Best Buy store tomorrow, April 17. According to news first reported by Engadget, an internal memo confirms the Minnesota-based retailer will feature the tablet on its new flyer and will have many units available at each of its North American stores. The leaked memo, which we’ve included here, states that each store will have “an ad minimum of three units for each iPad 2 model." However, what this means isn’t exactly clear. There are 18 models of iPad 2s (six Wi-Fi and 12 3G models), meaning each store would have in stock 54 units. In actually, Best Buy might only be offering three of each sized unit, or a total of nine units. In other words, three of the following: 16GB, 32GB, and 64 GB, with an unknown breakdown between Wi-Fi and 3G units by store. Also, there seems to be some confusion on whether the "ad minimums" only concern Michigan and Ohio, or every state. Regardless, there will be limited quantities at each store and no rain checks. We suggest arriving at Best Buy early tomorrow morning, because it could be a great opportunity to get the second-generation iDevice. Are you a Best Buy employee? We would love to hear your take on the internal memo. Please use the comments below. 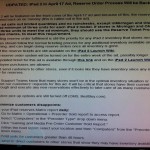 Still Looking For An iPad 2? Shop At Best Buy On Sunday, April 17 [Updated]

Still Looking For An iPad 2? Shop At Best Buy On Sunday, April 17 [Updated]
Nothing found :(
Try something else