You are using an outdated browser. Please upgrade your browser to improve your experience.
by Bryan M. Wolfe
April 6, 2011
Discussion of a disturbing FaceTime glitch is ongoing in the Apple Discussions Forum.  Some iPhone/iPod touch users report random photos popping up during a call. Strangely, the photos aren’t located on the iPhone's camera roll. Rather, the camera itself took them without the user's knowledge, in news first reported by 9 To 5 Mac. Imagine waking up one morning, reading that morning’s news on your iPhone, while lying in bed. Later in the day, you make a conference call via FaceTime to one of your business associates. Unfortunately, instead of seeing you smartly dressed in business attire, they see a photo taken earlier in the day of you lying in bed. Luckily, the glitches being reported are not as damaging as our example. After all, only the iPhone user is seeing the photos taken. However, they are still troubling. One user wrote:

My boyfriend and I have both recently experienced this problem several times – when one of us is calling the other via FaceTime, an old picture freezes on our screen, while the person receiving the call only sees a black screen. It’s kind of creepy, because it brought up photos of both of us at work, where I have used FaceTime a few times but he never has.

Just minutes ago when i called my girlfriend and i saw a “picture” of myself from today when i was at the office. I know it was from today because i had the exact same shirt. The weirdest thing is that picture is not stored on my iPhone. [sic]

Photos popping up during a FaceTime chat is worrisome enough; knowing the iPhone is taking these photos without our knowledge is more troubling. Hopefully, Apple will fix this problem soon. Has this happened to you? Let us know by leaving your comments below. [Photo: Jessica Dolcourt/CNET] 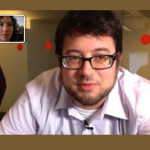 Is Your iPhone's Camera Spying On You?

Is Your iPhone's Camera Spying On You?
Nothing found :(
Try something else