You are using an outdated browser. Please upgrade your browser to improve your experience.
by Bryan M. Wolfe
April 29, 2011
Today, U.S. Sen. Al Franken (D-Minn), confirmed representatives from Apple and Google will attend a hearing on mobile technology and privacy. This hearing, scheduled for May 10 in Washington, D.C., will address the ongoing “locationgate” saga. According to Franken:

"I'm pleased that Apple and Google have confirmed that they'll be sending representatives to testify at my upcoming hearing on mobile technology and privacy. This hearing will serve as a first step in investigating if federal law protecting consumer privacy-particularly when it relates to mobile devices like smartphones and tablets-is keeping pace with advances in technology. Each of the witnesses at the hearing will play a critical role in helping us better understand this complex issue and I look forward to hearing from them."

Franken, who heads the Judiciary Subcommittee on Privacy, Technology and the Law, calls the hearing “Protecting Mobile Privacy: Your Smartphones, Tablets, Cell Phones and Your Privacy.” The meeting representatives from the two tech giants were requested to attend, which was made public earlier this week, will include witnesses from the Department of Justice and the Federal Trade Commission. In addition, Ashkan Soltani, independent privacy researcher and consultant, and Justin Brookman, Director of the Center for Democracy and Technology’s Project on Consumer Privacy, will also be in attendance. On Wednesday, Apple answered questions on location data storage. This came after it was uncovered that iOS 4 includes code that appears to “track” a user’s coming and goings. Apple promised a iOS update will address these concerns. The "Protecting Mobile Privacy: Your Smartphones, Tablets, Cell Phones and Your Privacy," is scheduled for Tuesday, May 10th at 10:00 a.m. EDT in 226 Dirksen Senate Office Building. 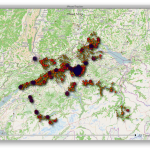 Apple & Google Head To Washington To Address "Locationgate"
Nothing found :(
Try something else