You are using an outdated browser. Please upgrade your browser to improve your experience.
by Bryan M. Wolfe
April 6, 2011
Remember the white iPhone 4 model first expected in June 2010?  Forget about it. Apple has quietly removed all references to the infamous handset from its worldwide websites, according to news first reported by Apple Rumors. Earlier in the day, Apple’s online store was offline. When it returned, instead of finding something new to buy, users found something else: no further mention of the white iPhone 4. According to Apple Rumors, the company eliminated everything about the white iPhone 4, from graphics to database references.They even removed a photo of the notorious iDevice from its Bumper screen. Ten months after its introduction, can we finally say the white iPhone 4 is dead? Perhaps we can. What do you think? Leave your comments below. 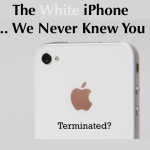 Is The White iPhone 4 Dead And Buried For Good?

Is The White iPhone 4 Dead And Buried For Good?
Nothing found :(
Try something else