You are using an outdated browser. Please upgrade your browser to improve your experience.
by Bryan M. Wolfe
April 28, 2011
Although Apple hasn’t stated so officially, it looks like the white iPhone 4 is slightly thicker than the original model, in news posted by Ryan Cash of Marketcircle, and confirmed separately by MacRumors. What this means for iPhone case manufacturers remains to be seen. According to Cash, Apple doesn’t mention the size differences on their Tech Specs page, but the difference is obvious according to these photos: The photos were provided by a Marketcircle associate. A MacRumors reader confirmed the same, stating:

Just picked up the white iPhone 4 and realized it doesn't fit into my Incase slider case. It appears that Apple has increased the size of the plastic that borders the glass on both sides by about 1mm.

Although the size difference isn’t significant, it could be just enough so that the handset won’t work with all of the cases on the market. This, of course, could become a major issue. If any of our readers can confirm this, please let us know. Leave your comments below. 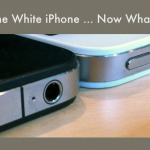 The White iPhone 4 Is Thicker Than The Black Model

The White iPhone 4 Is Thicker Than The Black Model
Nothing found :(
Try something else