You are using an outdated browser. Please upgrade your browser to improve your experience.
by A.T. Faust III
May 31, 2011
Fortune's Philip Elmer-Dewitt has dissected the results of a just-published three-month Nielsen survey concerning the market positions of various mobile operating systems in use. Surprisingly, the numbers seem to indicate that Android's ascent over iOS has reached a plateau, while RIM has apparently stopped the hemorrhaging of BlackBerry's plummeting market share. In short, all three major mobile OSes have been holding steady from February through April of this year. One surprise came of the survey, though. Elmer-Dewitt explains:

Although iPhone owners are more likely than Android aficionados to download apps, stream music or watch videos, individual Android users who do that kind of stuff tend to gobble up significantly more data. A Nielsen analysis of nearly 65,000 cellphone bills in the U.S. found Android owners consuming an average of 582 MB of data each month, compared with 492 MB for iPhone owners.

The reasons for the disparity are unknown, but many reckon it has to do with the idea that Android owners are likelier to be "power users" than than those running iOS. Personally, when you're talking about only a 90 MB difference between averages, I doubt the "power user" moniker really means much. Tethering is the more likely culprit, as it's been a common service offered by Android carriers for quite some time (and iPhones on AT&T were only recently officially tether-supported). However, looking back, perhaps the numbers aren't that surprising. PC Magazine said in December 2010:

All told, everything seems to be maintaining the status quo. I doubt things will stay this way for too much longer, but it's nice to be able to sit back, relax, and take a much-needed breather. Update: Reader MarcC. makes a good point about the greater data consumption on Android possibly being related to the use of real-time widgets and constantly-updating background social apps. 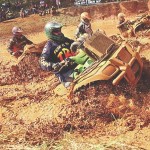 Android's Ascent Past Apple Is Over But Everyone's Still Stuck In The Mud
Nothing found :(
Try something else