You are using an outdated browser. Please upgrade your browser to improve your experience.
by Bryan M. Wolfe
May 31, 2011
In what many might consider a surprising announcement, Apple just announced the details of next week's WWDC opening Keynote. With it, the tech giant officially announced iCloud, a new cloud service offering, as well as the company's intent to officially unveil its next generation Mac software, OS X Lion. In addition, Apple confirmed Apple CEO Steve Jobs would speak at Monday's keynote. Last, but not least; Steve will be unveiling on stage iOS 5, the next generation OS for the iPhone/iPod touch and iPad. Here is the entire release:

CUPERTINO, California—May 31, 2011—Apple® CEO Steve Jobs and a team of Apple executives will kick off the company’s annual Worldwide Developers Conference (WWDC) with a keynote address on Monday, June 6 at 10:00 a.m. At the keynote, Apple will unveil its next generation software - Lion, the eighth major release of Mac OS® X; iOS 5, the next version of Apple’s advanced mobile operating system which powers the iPad®, iPhone® and iPod touch®; and iCloud®, Apple’s upcoming cloud services offering. WWDC will feature more than 100 technical sessions presented by Apple engineers. Mac® developers will see and learn how to develop world-class Mac OS X Lion applications using its latest technologies and capabilities. Mobile developers will be able to explore the latest innovations and capabilities of iOS and learn how to greatly enhance the functionality, performance and design of their apps. All developers can bring their code to the labs and work with Apple engineers. For more details, visit the Apple Worldwide Developers Conference 2011 website at developer.apple.com/wwdc. Apple designs Macs, the best personal computers in the world, along with OS X, iLife, iWork and professional software. Apple leads the digital music revolution with its iPods and iTunes online store. Apple has reinvented the mobile phone with its revolutionary iPhone and App Store, and has recently introduced iPad 2 which is defining the future of mobile media and computing devices.

Apple typically does not make press announcements such as these, especially ahead of WWDC. After all, part of the fun is the air of uncertainty of what to expect going in. Yet, this doesn't mean the press release has answered all of our questions. For example, although the company announced iCloud would be the name of its "cloud services offering," they didn't give us the details. In addition, there is no mention of a next-generation iPhone. However, that doesn't mean it won't be unveiled next week. Stick around as we set the stage for next week's WWDC conference in San Francisco, California. In addition, be sure to check out our iOS 5 and iPhone 5 roundup pages for all the details and rumors. Excited? Leave your comments below. 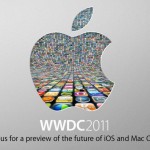 Apple Announces iCloud, iOS 5 & Steve Jobs At Next Week's Keynote
Nothing found :(
Try something else