You are using an outdated browser. Please upgrade your browser to improve your experience.
by Bryan M. Wolfe
May 14, 2011
Apple has submitted a patent application for a system that allows users to translate Text-to-Speech and vice versa, according to Patently Apple. The request, which was just published by the U.S. Patent and Trademark Office, could make communicating in difficult environments much easier. The patent is Apple’s way of addressing two different types of situations. The first is when a smart phone user is in a loud location, such as a bar or restaurant where making voice calls is nearly impossible because of the surrounding noise.  The second is when a user is in a quiet location, such as in a meeting or at church, when making a voice call would be inappropriate. Apple’s solution is to convert speech into text and prerecorded notifications. According to the patent, Apple suggests four different “embodiments,” which include:

Apple is said to be working with Nuance to bring advanced speech recognition to iOS devices. This patent request includes some of what could be included in such a system. Note: According to Patently Apple, Apple credits Baptiste Paquier, Aram Lindahl and Phillip Tamchina as the inventors of patent application 20110111805, originally filed in Q4 2009. What do you think? Leave your comments below. 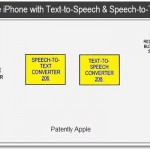 Apple Patent: Calls From Noisy Places Could Be Thing Of The Past

Apple Patent: Calls From Noisy Places Could Be Thing Of The Past
Nothing found :(
Try something else