You are using an outdated browser. Please upgrade your browser to improve your experience.
by DM
May 22, 2011
Is Apple planning a true cross-platform word processor? A new patent revealed this week, by Patently Apple, shows that Apple is interested in the idea of a platform and resolution independent document creator. It’s a sort of mashup of Adobe’s PDF (which produces perfect reproductions of an original, regardless of what fonts you may have installed) and Google Docs (where both the creation and viewing of documents happens in the cloud). Obviously, the patent lends itself to being rolled into iWork.com, but there are many other potential uses for it. OK, so, what makes this patent different? Essentially, Apple is working on a cloud-based “typesetting engine” that takes into account every detail of how fonts and graphics look, and how they differ, across various platforms. It would use this information to render a perfect copy of your document, so that everything would look right: every word, every linebreak, every character. Much like a PDF, the file would be pixel accurate, but here’s the key: it would remain editable, without affecting accuracy, via a cross-platform Web app. It may not sound like much, after all, Google Docs can create cross-platform documents just fine. But two things count here: the pixel-perfect layout and typography (something Google Docs can’t do), and the ability to collaboratively edit across platforms without an install, and without compatibility issues. That’s something Acrobat can’t touch. Of course, with Apple’s trademark polish and user-friendliness, there’s potential for a massive development here. Most people won’t claim that Acrobat is intuitive or even very usable, but if there’s one thing Apple is good at, it’s making things usable. Just as the iPod and iPad weren’t the first products of their kind, this patent isn’t meant to introduce an entirely new concept, but it could shed light on what might become a new gold standard. In fact, someday, we might look back on the militaristic Word format and its suite of almost-correct fonts (Arial is not Helvetica) and laugh about how ugly and limited all our documents used to be ... all for the sake of compatibility. But as with all Apple patents, we’ll just have to wait and see where this one goes. 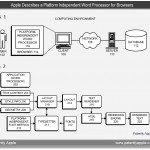 Apple Patent: A Cross-Platform Word Processor?
Nothing found :(
Try something else