You are using an outdated browser. Please upgrade your browser to improve your experience.
by Bryan M. Wolfe
May 17, 2011
Nearly ten years after the opening of its first Retail Store, Apple is planning a party. This weekend the Cupertino, California-based company is launching “something big for its 10th retail anniversary,” according to BGR. It was May 19, 2001 when the first two Apple Stores opened, in Tyson’s Corner, Virginia and Glendale, California. Today, the company has 324 stores in 11 countries. According to BGR, this is what has been unfolding at Apple Stores worldwide: What do you think Apple has planned? Let us know by using the comments below. 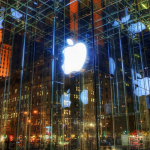 Apple Planning Something Big For 10th Retail Anniversary
Nothing found :(
Try something else