You are using an outdated browser. Please upgrade your browser to improve your experience.
by Bryan M. Wolfe
May 10, 2011
YouTube is expanding their movie rental business. The Google company will add 3,000 new and catalog releases to its collection, according to a press release first reported by Engadget. In news that will underwhelm many, NBC Universal, Sony Pictures, and Warner Bros., are partnering with YouTube to offer the additional titles, which will increase the video sharing site’s overall rental offerings to 6,000 titles. Each will be priced at $3.99 for new releases and $2.99 for others. Initial titles include Inception, The King's Speech, Little Fockers, The Green Hornet, and Despicable Me. Unfortunately, the service is riddled with limitations. For one, it will only work on a computer or through Google TV. The service, at least for the time being, is not available for mobile devices such as the iPhone/iPod touch or iPad. Second, most movies are only offered in standard format. Finally, even at 6,000 titles, YouTube is way behind Netflix, the movie streaming leader. According to a September 2010 Feedfliks survey, Netflix offers 28,000 streaming titles. Of those, 4,315 are available in HD. Since then, those numbers have surely grown. In addition to Netflix, YouTube also has to compete against Apple’s iTunes service and Amazon’s video rental business, among others. Can Google's YouTube brand compete in the video rental business? What do you think? Leave your comments below. 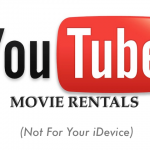