You are using an outdated browser. Please upgrade your browser to improve your experience.
by Bryan M. Wolfe
May 31, 2011
The U.S. federal government is throwing away its BlackBerrys and replacing laptops with iPads, according to a new piece by The Washington Post. While the government has been often described as a place where technology upgrades come at a “Little House on the Prairie” pace, that is no longer the case. And Apple appears to be the biggest winner in the government’s move to new gadgets. The U.S. government spends $80 billion annually on information technology. Whereas those dollars used to go to BlackBerry’s RIM, that is changing. The reason for the switch is largely tied to changing consumer preferences at home as well as agency directors and senior officials using newer gadgets, such as the iPad. According to Vivek Kundra, the federal government’s chief information officer:

People have better access to information technology at their homes than they do at work, and that’s especially true in the public sector. If you look at the average school kid, he or she probably has better technology in his or her backpack than most of us do in government offices.

With this in mind, Kundra is beginning to give U.S. government employees what they want. The chief information officer wants everyone to be a “one-device guy.” In other words, rather than carrying around a U.S. government-sponsored BlackBerry and an iPhone for personal use, workers should only have to carry one handset. Therefore, in many agencies employees are having a choice of handsets. For example, the Department of Veterans Affairs is letting its clinicians choose an iPad or iPhone instead of a BlackBerry. According to Charlie Wolf, an analyst for Needham & Co., BlackBerry is a one-trick pony. He states:

The one trick was their secure messaging platform. Management has yet to understand that the world has changed. They didn’t understand that it was a software game going forward.

It will be interesting to see how the popularity of the iPad and iPhone changes the U.S. government. Already, we know the president uses an iPad 2, so that is saying something. What do you think? Leave your comments below. 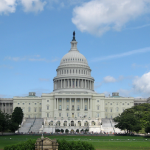 U.S. Government Moving Towards iPhone, iPad
Nothing found :(
Try something else