You are using an outdated browser. Please upgrade your browser to improve your experience.
by Bryan M. Wolfe
May 13, 2011
Amazon is close to revealing a multipurpose tablet of its own, according to Consumer Reports. The new device would complement its current line of Kindle e-books. The venerable publication came away with this assessment after speaking recently to Amazon CEO Jeff Bezos about the prospect. Without confirming (or denying) the recent Amazon tablet rumors, Bezos said to “stay tuned,” on the company’s plans. However, Bezos did indicate that if such a device would come, it would be more likely to “supplement than to supplant the Kindle,” which he calls Amazon’s “purpose-built e-reading device.” In other words, the new tablet would compete with existing tablets such as the iPad 2. On May 3, DigiTimes reported Amazon would reveal an unnamed device later this year, which would include a full color LCD screen and fringe field switching technology. They stated Taiwan-based notebook maker Quanta Computer had already received OEM orders from Amazon for the project. As we stated at the time, Amazon’s tablet will likely be Android-based considering the company’s recent introduction of its Android Appstore. This means the tablet would naturally have to ability to use apps. The color tablet’s arrival (a Kindle Color?) would come after Barnes & Noble recently updated its e-book reader, the Nook Color, to include Android OS 2.2/Froyo and its own Nook Apps store. We believe that Amazon’s goal, however, isn’t to take on the Nook, but rather Apple and its market-leading iPad 2. What do you think? Leave your comments below. 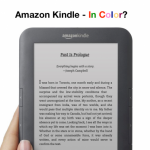 Consumer Reports: Amazon Set To Reveal Multipurpose Tablet
Nothing found :(
Try something else