You are using an outdated browser. Please upgrade your browser to improve your experience.
by A.T. Faust III
May 17, 2011
Of the rumors surrounding Apple Retail's tenth anniversary this weekend, one is shining quite a bit brighter than all the rest. Via BGR's continuing coverage on the matter, new details have surfaced that have the brunt of the event circling around near field communication POS installations. Says the Boy in his Genius Report:

[W]e have been told that there were recently multiple “overnights” in Apple retail locations, which required store employees to “assist in installing TBD devices” throughout the stores “as the retail segment of Apple grows.” ...[S]ources tell us that there have been new tables installed in stores that have different wiring compared to Apple’s standard tables. They also have cash wraps built in, but they aren’t being used yet and employees have been instructed to wait for further information.

The difficulty in installing a setup of this nature overnight could certainly explain those gigabytes of data Apple retail employees have had handed down from corporate; and, if true, this can be regarded as nigh unequivocal proof that the next iPhone -- whatever it's called -- will have NFC tech baked on in. And while the technology is not yet nearly as ubiquitous or standardized as Apple would historically prefer, chances are good that the Cupertino company has something up its sleeve. A possible strategic partnership with Visa and MasterCard could make sense, as could this little bit of controversy. Remember, though, that only yesterday many industry analysts were claiming and believing that the next-gen iPhone would not launch with NFC capabilities. Personally, I also thought on-board NFC an unlikely update for the 2011 iPhone, but these recent developments are quickly changing my mind. And just to be in on the ground floor, I'm going to go ahead and coin the phrase "NFCgate." You heard it here first. 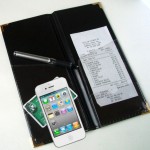 Near Field Communications May Be Coming To An Apple Store Near You
Nothing found :(
Try something else