You are using an outdated browser. Please upgrade your browser to improve your experience.
by Bryan M. Wolfe
May 13, 2011
Just days after rumors began indicating the iPad 3 could come in 3D, we’ve got something else for our readers to ponder. A film student in Los Angeles, Zach King, envisions a hologram in future iDevices. To get his point across, he has released this video showing an iPad 2 with a fictional hologram setting. Take a look: King demonstrated how an iPad's Camera Roll and Facebook app would work using a hologram. According to Digital Inspiration, King’s vision is largely based on the 2009 Sixth Sense demonstration by MIT researcher Pranav Mistry. Presented at TED, Mistry showed how a wearable projector would allow users to use hand gestures to interact with information. For example, you could hold a book in your hands, while a device could overlay reviews of that book onto the book cover itself. What do you think? Would you buy an iPad with a built-in hologram option? Let us know by using the comments below. 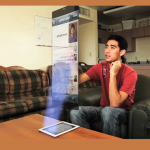 A Hologram Meets The iPad 2 (Video)

A Hologram Meets The iPad 2 (Video)
Nothing found :(
Try something else