You are using an outdated browser. Please upgrade your browser to improve your experience.
by Bryan M. Wolfe
May 10, 2011
Apple has won patents covering a range of products customers have long enjoyed via OS X and/or iOS. However, it's the one patent accepted for a product Apple never produced that is most interesting, according to Patently Apple. In total, the U.S. Patent and Trademark Office announced 16 newly published patents. The patents announced include ones for “for iLife's iDVD application, a method for creating Web Clip Widgets for iOS devices, Cover Flow, and iOS's virtual keyboard.” The government also granted a patent for an iPad design that never came to market. This design was for a device that included a Landscape USB Port and Sim Card Slot. Accordingly:

It's unknown at this time as to why Apple decided to scrap the secondary Landscape USB slot – when consumers clearly wanted such an option. Of course Apple could always decide to reinstate the USB slot in a future version of the iPad or simply shift to wireless charging which would eliminate the need for such a port in the first place. The latter is likely the reason for scrapping it.

It will be interesting to see if Apple ever produces an iPad with slots. If they do, we now know they have the patent to do so. What do you think? Leave your comments below. 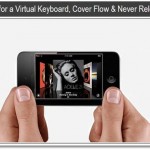 The iPad Apple Never Released
Nothing found :(
Try something else