You are using an outdated browser. Please upgrade your browser to improve your experience.
by DM
May 13, 2011
An article published on April 2nd declared iPhone "dead in the water" as a result of Android's crushing momentum. Now, by most accounts, the author of that article, Henry Blodget, isn't exactly the most trustworthy of analysts-- in 2002, he was barred from the Securities industry, charged with civil liberties fraud and fined $2 million for publishing inaccurate and contradictory information. But nevertheless, the idea that "iOS is dead in the water, and Android killed it" has caught some people's attention. It certainly invites a compelling comparison to the Windows-vs-Mac OS battle. The problem is, not only is the iPhone not dead in the water: it's actually almost impossible to claim that it is. Horace Deidu at Asymco notes the origin of the phrase "dead in the water", which has to do with a ship losing its rudder control (and thus its steering and maneuverability). Perhaps Blodget's claim was meant to use the phrase rhetorically, as it's clear the iPhone isn't lacking in direction--or maneuverability-- by any stretch. Deidu then runs the numbers on this claim and concludes by stating,

On a unit basis and one the basis of vendor comparison, iPhone is doing very well. On the basis of value capture and profitability it’s doing even better.

Think about this: Blodget claims that "Apple's iPhone share increased slightly, but is dead in the water and has now fallen way behind Android (in smartphones)." Sounds good as an attention-getter, but the iPhone's share of all phones is still growing, as its share of all smartphones. Apple is the 4th most popular phone maker in the world now, with a staggering 5% of all phones sold. That's more than RIM, HTC, Motorola, and Sony Ericsson. In noting these numbers, Deidu asks, "what makes the iPhone dead in the water?" He then discovers the exact pattern of factual exclusion that allows Android to claim victory: are you ready? If we count only: ... then we can claim that Android is winning. Forget the fact that the Android tablet market is still "directionless" (perhaps "dead in the water"?), or the continuing power and viability of the App Store. And, of course, you'd need to forget the fact that Netmarketshare, who specialize in producing accurate reports, shows Android's internet usage share for April as a whopping 0.66% (while iOS has kicked up 1.5% to crest at 2.24%). Incidentally, according to Netmarketshare, the Mac OS is hanging out at just 5.4% compared to Windows' 88.9%--incredible when you think of how visible the Mac platform has become. So, who's making up the Android activation numbers? It seems impossible for 350,000 Android phones to be activated every day if Android's market share only climbed 0.1% in April. One thing's for sure: from these numbers, it becomes fairly difficult to imagine the iPhone going anywhere but up. As Deidu reiterates, "If something is dead in the water, it isn’t going anywhere or making any progress." Sorry, we have to ask: does a growth of 255% in the past 6 months not count as progress? 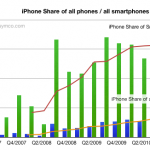 What's This About The iPhone Being "Dead"?

What's This About The iPhone Being "Dead"?
Nothing found :(
Try something else