You are using an outdated browser. Please upgrade your browser to improve your experience.
by Bryan M. Wolfe
May 10, 2011
Microsoft is making it easier for iOS developers to write apps for Apple’s mobile platform that also work with Windows Azure, Microsoft’s cloud platform. Accordingly, the company has released a new toolkit, which will also be made available for Android developers soon. A Windows Azure Toolkit for Windows Phone was released in April. According to a posting on The Official Microsoft Blog, “using the toolkits, developers can use the cloud to accelerate the creation of applications on the major mobile platforms.” Microsoft’s stance is telling in a number of ways. First, it proves the Redmond, Washington-based company has decided on a strategy to coexist with other mobile companies, rather than trying to destroy them. Second, the company seems committed in making sure Windows Phone won’t become a gated area, but rather a part of the larger mobile community. For consumers, it could mean apps created for one platform, but ultimately available on others in quick succession. The links for interested developers are here: https://github.com/microsoft-dpe/watoolkitios-lib https://github.com/microsoft-dpe/watoolkitios-samples https://github.com/microsoft-dpe/watoolkitios-doc What do you think? Leave your comments below. 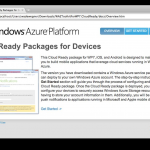 Microsoft Makes Toolkit Available For iOS Developers
Nothing found :(
Try something else