You are using an outdated browser. Please upgrade your browser to improve your experience.
by Bryan M. Wolfe
May 17, 2011
Apple has quietly submitted a proposal for a new standardized SIM card design that is even smaller than the current micro-SIM used in the iPhone 4 and iPad 2. This could result in thinner iDevices as early as next year, according to Reuters. Already French carrier Orange has approved the plan, according to the company’s head of mobile services, Anne Bouverot. She states:

"We were quite happy to see last week that Apple has submitted a new requirement to (European telecoms standards body) ETSI for a smaller SIM form factor -- smaller than the one that goes in iPhone 4 and iPad. They have done that through the standardization route, through ETSI, with the sponsorship of some major mobile operators, Orange being one of them.”

Short for subscriber identification module, a SIM’s primary purpose is to store a service-subscriber key (IMSI), which ties a mobile subscriber to their device.

The current standard, a micro-SIM, is 15 mm by 12 mm and 0.76 mm thick, according to Wikipedia. How much thinner can they get, and would it really make a difference in terms of iDevice thickness? 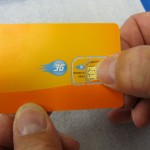 Smaller SIM Cards Could Mean (Even) Thinner iDevices In 2012

Smaller SIM Cards Could Mean (Even) Thinner iDevices In 2012
Nothing found :(
Try something else