You are using an outdated browser. Please upgrade your browser to improve your experience.
by A.T. Faust III
May 21, 2011
This should come as little surprise to most of our readers (and iDevice users in general), but it seems that iOS is really blossoming into the financial gaming giant Nintendo knew it would become. While I don't think a touchscreen-only device can ever deliver the gaming industry's most premium experiences, they have proven to be winners in the casual to middling (and budget) games marketplace. To that end, Italian iPhone blog iSpazio points us to the chart wizards at Distimo (partnered with analysis firm Newzoo) and their crafting of another bit of graphical insight into the daily numbers of iOS gaming. The numbers above represent gamers from the US, UK, France, Germany, Spain, The Netherlands, and Belgium, amassing a total of more than 63 million iOS gamers. If that sounds like a lot, that's because it is: "Games" is the single largest category in the App Store and accounts for over 50 percent of free and paid app downloads. Claims Distimo:

In total, more than five million games a day were downloaded in the US and six European territories combined during March 2011. The 63 million iOS gamers in these seven countries downloaded an average of 2.5 games per month.

[t]he share of iPhone owners who play iOS games is between 50 and 75%. Nearly 15 million Americans who play games on mobile phones or tablets actively use an iPad, and in the European countries this total is seven million. The iPad is ahead of the PlayStation Portable in terms of the total number of people playing games on a specific device.

That, friends, is pretty incredible for non-dedicated pieces of gadgetry. What this means for gaming as an industry is clear: We'll be seeing more IPs and ports coming to iOS in the months and years ahead. What this means for the likes of traditional console makers and portable gaming giant Nintendo is a little less clear. But, as I said earlier, I dont think we'll need to console fans of consoles and Mario any time soon. When I want a quick, casual play or puzzle, I grab my iPhone or iPad. When I want a blockbuster experience on the big screen, I fire up the PS3 and play Uncharted, Ico, or Metal Gear Solid. The more things change, the more they stay the same... 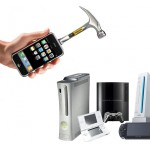