You are using an outdated browser. Please upgrade your browser to improve your experience.
by Bryan M. Wolfe
May 2, 2011
Time Inc., has reached a deal with Apple to make all of its iPad editions free for print subscribers. This arrangement, which becomes effective today, includes Sports Illustrated, Time, and Fortune magazines. In news first reported by The Wall Street Journal, the negotiations between Time Inc. and Apple were done at the highest levels, and included Eddy Cue, Apple’s vice president of Internet services. However, the terms announced aren't exactly a win for Apple. Apple and major publishers have been at odds over the company's subscription plan, announced earlier this year. To sell iOS subscriptions within an app, magazine publishers are required to give Apple a 30 percent cut of each sale. In addition, it is Apple who owns the subscriber content. This information is typically used by publishers for marketing purposes. So far, The New York Times, News Corp., and Bloomberg BusinessWeek are the only publishers to agree to these terms and hence, each is allowed to sell iPad subscription within their apps. Today’s announcement does not add Time Inc.’s titles to this list, since the publisher still controls the subscription process. In other words, to order a subscription, users must first purchase a print subscription and then activate it through the iPad app. What users can purchase within the app are single issues, which cost much more than print subscriptions. Still, it is nice to see Time Inc. and Apple agreeing to something. What to you think? Leave your comments below. 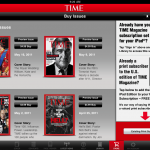 Apple Blinks On New Subscription Terms With Time Inc.
Nothing found :(
Try something else