You are using an outdated browser. Please upgrade your browser to improve your experience.
by Bryan M. Wolfe
June 9, 2011
We’ve received numerous reports the upcoming gesturing feature in iOS 5 will not work on the original iPad. If proven correct, this would be the first time the first-generation iPad was denied a key feature besides those that require the iPad 2's camera. Gestures, which are a key component of the upcoming iOS 5, were originally spotted in the final release of iOS 4.3. It allows users to move around the iDevice using additional finger gestures. However, while the first iOS 4.3 beta included the feature, the final version did not. Still, the feature lived on for those who enabled it using Xcode. Unfortunately, developers are reporting gesturing in the first iOS 5 beta does not work on the original iPad. When describing gesturing in iOS 5, the Apple site offers no restriction language, saying only:

iOS 5 includes a few new moves and shortcuts to help you get around even quicker on your iPad: Using four or five fingers, swipe up to reveal the multitasking bar, pinch to return to the Home screen, and swipe left or right to switch between apps.

Using Xcode, we've been able to use them ourselves for a little while already. This is a terrific tool, especially on the iPad. Not only does it make it easier to move back and forth between apps, but it’s fun to use too. It would be surprising for Apple to eliminate such a feature on the iPad, especially given it works just fine through iOS 4.3 either through a developer license or tweak. However, all might not be lost. Even if the feature isn't included in iOS 5 beta, this doesn't mean it won't return for the final iOS 5 release. At this point, we really don't know. As such, we will keep you updated on this story. Have any other iOS 5 beta testers experienced this issue using an original iPad and iOS 5 beta? Please let us know by using the comments below. 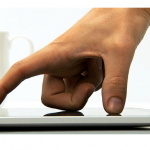