You are using an outdated browser. Please upgrade your browser to improve your experience.
by Bryan M. Wolfe
June 23, 2011
Apple is cooking up something tasty for all of us couch potatoes: interactive widgets by way of its Apple TV. Unlike traditional TV widgets, these would allow us to 'talk back' in real-time about current television programming. The proposed system, described by Apple as being an enhanced TV widget paradigm, is part of a new patent application, according to Patently Apple. Unlike existing television widgets that are static, Apple’s paradigm involves “taking widgets to the new level of live widgets that will interact with TV shows.” Widgets are nothing new for television viewers. Some of the most popular are those offering current weather or stock information, for example. However, Apple is thinking bigger. It wants to create a TV environment where widgets are aware of the media content that the TV is currently presenting. According to Patently Apple, Apple sees:

An enhanced TV widget paradigm in which widgets are capable of being content-aware and thus capable, among other things, of automatically (i.e., without intervening user input) providing the user with access to information or other resources that are complementary or otherwise relevant to the media content currently being presented by the TV set to the user.

For example, U.S. television viewers could someday use this type of technology to vote for their favorite American Idol contestant in real time via their television. Or, Jaws viewers, for example, would automatically gain access to a Jaws Trivia app that would magically appear when you begin the program. This is amazing stuff and seems to be further confirmation Apple is intent to become a bigger player in the TV Room. This follows a reported earlier this week that suggests Apple will soon reveal its first iOS-powered television display. Thoughts? 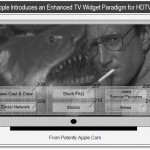 Apple Wants To Be A Television Star, Uncovered Patent Suggests

Apple Wants To Be A Television Star, Uncovered Patent Suggests
Nothing found :(
Try something else